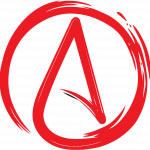 Atheist Alliance of America (AAoA) recently underwent the most significant changes since its inception nearly a quarter century ago. For those who are unaware, AAoA had historically been run by an affiliation of separate atheist organizations, which, as one might imagine, presented extra responsibilities for the affiliates and challenges for AAoA when it came to making substantive decisions in a timely manner.  In early 2016, Mark W. Gura and the Board successfully petitioned the Affiliate Council to relinquish their decision-making authority so that AAoA could control its own future in a democratic fashion. This marked an enormous turning point for our organization, and we are deeply appreciative of the kindness our affiliates and collaborators have extended to us over the years, and for the gracious manner in which they supported our request for autonomy.

Daring to dream big and making the most of its opportunities, AAoA assembled a powerhouse team of secular activists, educators, editors, authors, producers, and artists including Aron Ra as President; Rob Penczak as Executive Director; John Loftus, Derek Colanduno, Adam Tilford, and Kristi Dale as Board Members; and David Tamayo, Phil Torres, Tombstone Da Deadman and Bill Flavell as Advisors—all this while retaining Mark Gura as Vice President and Dustin Kemper as a Board Member, both of whom played key roles in providing continuity and revitalizing the organization.

AAoA is especially pleased to announce that the creator of Street Epistemology, Dr. Peter Boghossian, has officially joined AAoA as an Advisor, and that AAoA is forming a new division specifically focused on the promotion of Street Epistemology, which will be led by the nationally recognized practitioner and teacher of the techniques, provisional Board Member, Anthony Magnabosco, who said he was, “Extremely excited to be part of an organization with the desire and reach to help educate people about Street Epistemology.”

With its expanded audience reach, connections, and experience, AAoA can now offer exciting new deliverables to its members while serving as an incubator for secular activists and community organizations at all levels of maturity to achieve their own objectives. Established activists and those who are still in the process of growing their skill sets may wish to take advantage of our national platform along with the programs we’ll be rolling out in Street Epistemology; critical thinking; music and video production; and media development for public access television—from both in front of and behind the camera. We’re also putting together a speaker’s bureau and placement program for those who would like to go beyond their local scene and incorporate traveling into their activism. Individuals and groups alike may wish to either collaborate with Atheist Alliance, affiliate with it in a more formal manner, or come directly under the AAoA banner.

This year, AAoA was also proud to participate in Reason Rally 2016, where nonbelievers came together in a show of solidarity and political will.  Hats off to Lyz Liddell, the Reason Rally Coalition Board of Directors, and all the sponsoring individuals and organizations for bringing this event to fruition. And on a personal note for Mark, as a representative of AAoA, there could have been no more fulfilling way to cap off the Rally than to present the Richard Dawkins Award to the 2015 Humanist of the Year, renowned theoretical physicist and science communicator extraordinaire, Dr. Lawrence Krauss.

Atheist Alliance of America has been serving nonbelievers for almost a quarter century and can’t wait to unveil its new initiatives, including plans for a 2017 convention in Atlanta as it hits its 25-year anniversary!

Stay tuned for more updates from the Atheist Alliance of America! www.atheistallianceamerica.org