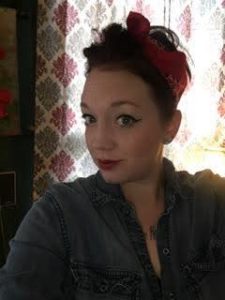 I’m an atheist living in Wisconsin, there aren’t too many of us in the up here, but I still love northern life. Most folks are nice until you say you’re an atheist and then they ignore you or cut you out, which has happened with friends and family. I’ve been blocked by numerous relatives and in laws who won’t even acknowledge my existence anymore. I had one of my cousins completely cut me off after the whole transgender bathroom ordeal, and in-law who did the same, especially after I told her that I’d trust my transgender friends in the bathroom with my son before a Catholic priest, and another in law that never said a word to me before she knew me because I got pregnant before my husband and I got married. My immediate family isn’t like that; my mother is pagan and both my sisters are agnostic. My home was never super religious growing up, thankfully.

My path to atheism began after I was told by a youth group leader at a friend’s church that a Buddhist monk that never hurt anyone wouldn’t go to heaven. I was 13. I studied religions, found myself really enjoying Buddhist principals, and leaning away from divinity of any sort. I studied psychology but all my philosophy professors told me that’s what I should do, my response was always “but I’m already awesome at bullshitting people”. I enjoy social sciences, people are fascinating to me, especially when it comes to language.

I am a mother to a little dude, who knew all his planets by the age of 2.5 and learned his ABC’s in relation to space terms. His first two word phrase was “Star Wars”. We also have two dogs and two cats and a dragon eel. It’s a busy home. I’m currently working with my younger of two dogs to become a therapy dog.

For work, I work at a spa, which comes with free massages, so that’s excellent. In life, my true passion is animals, I volunteer and have worked at our local shelter. I plan on starting a dog rescue focused on vets getting animals as soon as we pay off our house and get our dream farm. I love science and space and things that make me question life. I read mainly nonfiction books about language and the Smithsonian. Those are my favorite. We do watch quite a bit of TV, in which case I enjoy The Walking Dead, Game of Thrones, Godless, and of course Star Trek, Stargate, and damn near everything with space. And every year I attend a big steampunk convention called TeslaCon because I love cosplay and being a nerd.We also love going hiking and exploring the beauty Wisconsin and Upper Michigan have to offer. We are also known to host some fantastic parties and for drinking some good wine and beer. By the way: GO PACK GO!