Iceland’s move to ban the circumcision of young boys has attracted controversy and panic from the start. But do opponents of the bill truly grasp both its intention and implications? 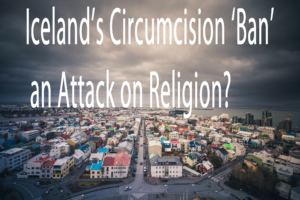 There seems to be an unsettling laissez-faire attitude concerning genital mutilation. Frank Furedi’s response to Iceland’s move to ban circumcision on young boys is not the first of its species.Christine Louis-Dit-Sully, another writer at Spiked, is author of the “The racist roots of the French FGM crusade,” which paints the endeavor to protect girls from undergoing genital mutilation (or ‘circumcision’ as she prefers to dilute it) as an undue attack on foreign populations in France, Christine determines the real issue to be “simplification and misrepresentation of female circumcision” and proffers as “solution” – confined to the breadth of her article’s concluding sentence – the vague “better access to medical facilities.” As questionable an article as it is, it pales in comparison to the absurdity of arguments seeking to justify tampering unnecessarily with a child’s genitals. What is behind this apparent nonchalance in the face of what many, including myself, see as nothing less than a violation of human rights?

The fulcrum of Mr. Furedi’s piece is, more or less understandably, a paranoia concerning what he seems to allude to as the anti-Semitic flavor of this potential legislation. Otherwise, the history lesson in Greco-Roman and medieval anti-Semitism would just seem forced. But the sheer percentage of the article devoted to this delve into the ugly past would invariably lead to the reader to the false equivalence of comparing Icelandic legislators to emperors and crosier-wielding church fathers of yore intent on snuffing out the Jewish people. The ultimate goal is the same. The sentiment fuelling both blood libels and Icelandic parliamentarians is the same. Right? As Furedi writes, “The Seleucid Emperor Antiochus would have thoroughly approved of the anti-circumcision outlook of the Icelandic parliamentarians. In 167 BCE, Antiochus ordered all Jews to leave their sons uncircumcised or else face death.” As of the time I am writing this, however, Iceland has yet to propose the death penalty for non-compliers.

But it is, nonetheless, an attack on religion, isn’t it? After all, the author writes, “In addition to banning circumcision, the emperor commanded that Jews should no longer study the Torah or keep their dietary laws.” Is this a subtle attempt at the proverbial slippery slope – that a ban on circumcision will inevitably lead to further constraints on freedom of religion? It would be consistent with the article’s opening line, which sets the stage for things to come in mentioning, not so subtly, the “demonization of religious freedom.” While it is not my wish to minimize racism or religious persecution – very real and ugly phenomena that both writers are correct to warn against – it is important to recognize that anti-circumcision legislation is simply not a matter of religious freedom. It neither appears within the context of religious persecution nor does it aim to target any one religion (plenty of non-Jewish, non-Muslim boys are circumcised in the U.S., as an example).

What opponents of the bill fail to realize, hiding as they are behind the liberal concept of freedom of religion, is that this very freedom is sound in so far as it does not conflict with human rights. Witch burning may very well be an intrinsic part of some faiths, but, in the words of American jurist Oliver Wendell Holmes, Jr: “The right to swing my fist ends where the other man’s nose begins.”

“Witch burning may very well be an intrinsic part of some faiths, but, in the words of American jurist Oliver Wendell Holmes, Jr: ‘The right to swing my fist ends where the other man’s nose begins.’ “

If religious freedom and parental choice do not stop at permanently and pointlessly altering the body of a non-consenting child, where do they draw the line? It is a grotesque inversion of the concepts of freedom and rights to infringe upon others’ freedoms from these practices. If it is the “right of Jewish people to circumcise their sons,” is it not likewise the right of sons to not be subjected to circumcision? And if it is indeed so integral to the practice of the faith, might it not be put off until the child reaches maturity, at which point he may decide whether or not to undergo the procedure?

“If religious freedom and parental choice do not stop at permanently and pointlessly altering the body of a non-consenting child, where do they draw the line?”

Perhaps most egregious of all is the assumption that parental rights are to be supreme and uncontested, when this is hardly the case in a myriad of other scenarios – in which child protection services are often called upon. It is naïve, or willfully deflective, to portray all parents as saintly sages who never act selfishly and who are completely divorced from their own upbringings and accompanying psychological baggage. Even if we do assume that all parents act with their children’s best interests at heart, often ignorance or misplaced concern can result in a child harmed. Overfeeding, corporal punishment, and vaccine denial are all excellent examples.

Of course, parents are under obligation to feed, clothe, and shelter their children and are endowed with the right to instill values as they see fit. As Mr. Furedi correctly writes, “Parents need the authority to perform all sorts of acts that the child cannot consent to.” But the problem lies precisely in the assumption that parents must be allowed “the freedom to make…decisions in a way that they think works best for their way of life.” This leaves the matter of child rearing open to an alarming degree of subjectivity. I allow for more nuance than Richard Dawkins, whom Furedi quotes as condemning parents who raise their children in their same faith, as the focus in that case is often on cultural heritage rather than strict, cult-like indoctrination and abuse. But an anti-circumcision bill hardly penetrates into the family bubble to impose Mao Zedong-style “atheism.”

The claim that “[t]here is no such thing as children’s rights” simply because “[p]eople having rights presupposes their capacity to exercise them” is flawed. As Mr. Furedi rightly goes on to say, the duty falls upon adults to advocate for their rights on their behalf. But the contradiction lies in then condemning Icelandic Member of Parliament Silja Dögg Gunnarsdóttir for doing this very thing. The children, after all, did not give her consent. I’m not quite sure what the author is trying to achieve here other than perhaps pointing to the inevitably subjective nature of trying to obtain anything on behalf of children. In the absence of universal and inalienable human rights, though, we get moral relativism. And perceiving the outrage concerning genital mutilation, male and female, as mere hysterics and virtue-signalling on the part of ‘evil, Western media’ is a symptom of that. I’m afraid the attempt to sugarcoat it as something else is the true distortion of language and reality here.

The fact of the matter is that the vulnerable need people to campaign on their behalf. We do it with animals. We do it with the environment. We ought to consistently do it with newborns with ambiguous genitalia, to spare them a life dictated by an operation imposed too soon to foresee how their hormones will influence them in the future. Why should we not also do the same for newborns who, given the option years down the line, would most likely refuse circumcision? It should be noted, also, that the bill does not ban circumcision. It simply protects children too young to consent to the practice. Boys who do indeed choose to undergo the procedure when they are old enough to “understand what is involved in such an action,” have the freedom to pursue that route.

People of all religions must be free to believe in what they see fit. Should anyone try to infringe upon that freedom, I will, as a secularist and atheist, fight tooth and nail to see their rights safeguarded. But I’m afraid the right to also practice beliefs, where the practice encroaches upon the autonomy of others, is secondary to that autonomy. Are newborns not also entitled to the fundamental freedom of choice and bodily integrity?