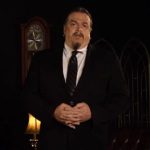 Aron Ra, the atheist activist and science communicator, has resigned as President of the Atheist Alliance of America, according to an article from his blog. He has decided to move on from the organization to focus on an increasingly busy schedule related to his Texas State Senate run. “So in an effort to minimize distractions, I have resigned as President of Atheist Alliance of America to concentrate on my increasingly busy State Senate Campaign. Yes, I’m really doing this despite how much of a long shot this is,” Ra noted.

He is running as a Democrat in Texas State Senate District 2, whose incumbent, Bob Hall, is a Republican. If Ra wins the Democratic primary in the spring of 2018, he will face a district where a Democrat has not run since 2002. Nevertheless, as an insurgency grows against President Donald Trump and the GOP, he may have an opportunity to stage a spectacular upset.

During his time as Atheist Alliance of America president, he helped to relaunch the Secular Nation podcast (disclosure: co-hosted by yours truly), assisted with the coming relaunch of Secular Nation magazine, and helped rebuild its presence within the growing Atheist movement.

If you are interested in learning more about Aron Ra’s candidacy and ways to support, visit his campaign website, aronra.org.